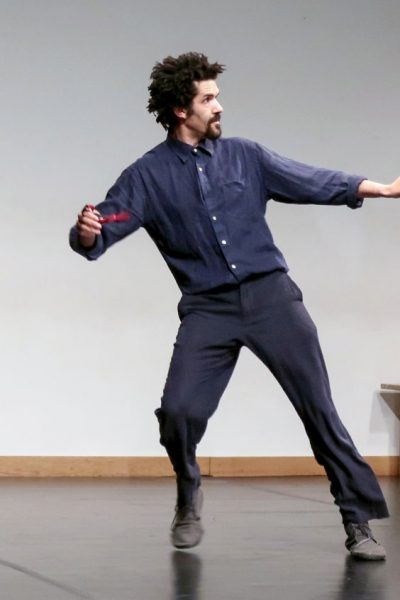 Seke Chimutengwende is a choreographer, performer, movement director and teacher.

His recent choreographies include Black Holes, a collaboration with Alexandrina Hemsley, (British Council’s Edinburgh Showcase 2019), the solo Plastic Soul (The Yard Theatre 2019),and Detective Work, a duet with Stephanie McMann (commissioned by NEUROLIVE 2021).

Seke is currently making It begins in darkness, which will premiere in September 2022, a group choreography looking at ghosts and haunted houses as metaphors for how histories of slavery and colonialism haunt the present. He will also be making a new group work for Candoco Dance Company in 2022.

Seke has performed for numerous dance companies including DV8 Physical Theatre and Lost Dog. He is currently working as a performer with Forced Entertainment and Sue MacLaine Company. Seke has also been practicing completely improvised performance, using movement and text, since 2006. He has performed over 70 solo improvisations internationally and has performed ensemble improvisation with numerous dancers, actors and musicians. Seke regularly teaches improvisation at The Rambert School of Ballet and Contemporary Dance, London Contemporary Dance School, The Royal Central School of Speech and Drama, and Goldsmiths University, among others. Seke has also worked as a movement director for theatre productions at The Yard Theatre, Battersea Arts Centre and The Gate Theatre.